While Dayton resident Mary Diperro Eberle was working as tour manager at the Dayton Art Institute, she walked the museum fairly regularly, although most of her time was spent sitting while booking tours. After she retired in 2013, she got even less exercise, was overweight and knew she had to get moving. 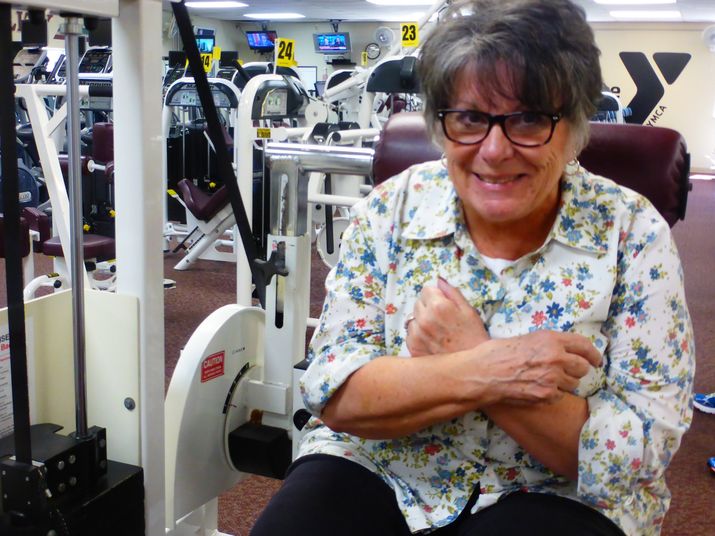 She joined the YMCA’s South Branch in Kettering, not far from her home in the Rubicon Mill neighborhood, and discovered a program offered for pre-diabetics.

“My doctor’s been watching my sugar numbers for a while, encouraging me to lose weight,” said the 68-year-old, whose mother and grandmother had diabetes.

“This program is for anyone with a blood sugar reading over 100. Mine was 106, so I was accepted into the program.

She said, “We started June 29, and have a class each week for 16 weeks, then every other week for a month, then once a month for the rest of the year. We have books — a Y prevention program notebook and ‘Calorie King,’ a fat and carbohydrate counter. We keep a food diary, talk, get handouts and learn how to change our lifestyles. We weigh in every week, and our blood count is monitored. So far, I’ve lost 17 pounds, and my blood sugar level has gone down one point.”

Eberle has more energy than when she began and notes that “the weight went on so fast, but comes off slowly.

”She’s not discouraged, although some are, and that was the subject of the Sept. 14 meeting.

“We went to Chapter 11, about negative thoughts on dieting. Many are working hard and not seeing results, or have reached plateaus and are getting discouraged. Most overweight people have an all-or-nothing attitude: They either want to lose it real quick or forget it. But no one has dropped out,” she said.

Class members are encouraged to exercise. Eberle signed up for aerobics, uses the recumbent bike and does resistance exercises on machines.

The YMCA’s diabetes prevention program is part of the Center for Disease Control’s National Diabetes Prevention Program, said Ali Schulze, the director of the program throughout the Dayton area.

“It’s been in the Dayton area since 2010 — one of the first 10 Y’s nationwide to start the program — and we offer it throughout our association, which covers Montgomery, Greene, Preble and northern Warren counties,” said Schulze, of West Carrollton.

“We have scheduled more than 1000 participants into the program, and the average percent weight loss is five percent after 16 weeks and 5.7 percent after 12 months,” Schulze said.

“Research shows a seven percent weight loss and exercising 150 minutes a week can help reduce the risk 58 percent for developing type 2 diabetes; if you’re 60 or older, it’s actually 70 percent,” said Schulze. The Y program is offered for anyone 18 and older diagnosed with pre-diabetes. According to the Y website, pre-diabetes can be reversed, but diabetes cannot.

“They contact me at aschulze@daytonymca.org, and I assess them; we usually want eight-to-15 participants to start a class,” Schulze said.

Eberle has no illusions about a quick-fix from the program. “It’s a lifestyle change, and some people with back or leg problems can’t do exercise, so lose more slowly. But I’ve learned you can control what you put in your mouth and just do what you can.”